Wizkid has assured his fans around the globe many times about the release of the impending album titled ‘Made in Lagos’ but this has remained in limbo.

On February 20, 2020, the Nigerian singer and songwriter took on his Instagram account to reveal that his long-awaited album made in Lagos is ready, the message came via Twitter when he tweeted “it’s done” this got all his fans thrilled.

He further appreciated his hard work which he also shared with his fans via Twitter. 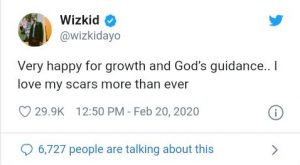 Everyone is thrilled but the question is how long will this take? many fans also reacted via Facebook telling him to release the album that they had waited for long.